Today a strange thing happened. I went to a pub with no intention of drinking beer! Am I feeling ok you may well wonder, well yes I am feeling fine thank you. I went to the Garden Gate in South End Green, where the very nice people are offering a free bloody mary if you scan one of those funny ZX81 graphics on your techno-phone, or sign-up here like I did. Some of the more waggish amongst you might like to know that you don't even have to give a real email to claim your voucher, but I would never recommend such a thing. It's a bit disingenuous and also you might miss out on other freebie offers... if they do them.
Anyways, so in I went with my freshly printed voucher to claim my vitamin-shake. When I've used these before (Young's pubs seem keen on them) they have always caused much confusion behind the bar, as if they'd never seen such a thing before and I was on the diddle. And to make matters worse the computer-till never has a 'free voucher' button. And here was no different, but the confusion and umming & aahhing was brief and minimal, and within a few minutes of getting served (it took an age to get served mind you, but this was a Sunday lunch time in Hampstead) I was sipping a rather generously-proportioned bloody mary. I am no expert in these things, but it seemed a little lacking in Tobasco and Worstershire Sauce, which I mentioned and the barman handed said condiments over to me to add them to taste. I didn't mention the upside drinks-stirrer hidden 'neath the surface.

They did however have some decent looking beers, although I can't remember what they were now. But I'd certainly come back here for a drink. Everyone was eating today, and there were a lot of posh idiots fresh from a walk on the Heath. One chap was showing off to a girl about his long trek up to Whitestone pond and back. A right little Captain Scott. They then went to talk about moving abroad because you know what it's like when you've just had enough of London, and you just have to live abroad for a couple of years. You just have to. They were in their mid-20s. Another girl could not believe it by around 3ish that the kitchen had closed because they'd run out of food. She kept trying to think of a food item they might have left, preceded by "what, like nothing at all? what about <insert food item here>?" She got more and more incredulous that no meant no. Then came "......... *big eyes* chips??". Idiot.
Anyways, the bloody mary was lovely. I drank it far too quickly, and the daylight outside hit me with a thump. Be warned! 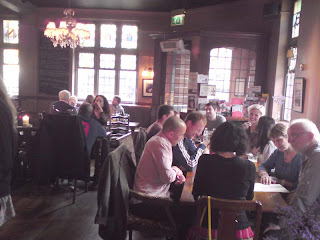 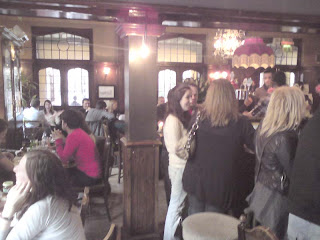 Writing this has made me want another bloody mary - I might just have to type in another email and don a beard & fake spectacles...