A legend amongst the capital's real ale drinkers made possible by the gaffer's canny decision to buy the ale tie from the pub-co.Mind you, he's paying a fair bit for it so Enterprise Inns aren't losing out that much.
So... what does one have presented with such a choice?! Firstly I went for a pint of BrewDog Trashy Blonde 4.1%, a wise choice as it turns out that the Bree have got the last ever batched brew for cask - after this it's all keg from them. As they give a generous Camra discount here - 50p off a pint - I thought I'd treat myself to another. In fact, while some pubs barely advertise their Camra discounts are even bewildered as to what to do with when presented with a card, here they positively thrust it on you. "Have you got a Camra card?" I heard the barmaid say to one chap who looked as if she was probably talking about his iPhone Hipstamatic app. "A student card?" (They also do student discounts, nurses & armed forces too) "Nope" came the reply, obviously wondering why she was asking about all these cards. Bus pass?? Green Shield stamps!? They're just desperate to give you a discount here!
Anyways, for my next pint I wasn't too sure. Lots of folk in these situations like to have tasters - here offered in little plastic shot glasses. I'd rather just bravely plump for something and live with it, although the black boards on the stillages don't really offer much in the way of description - but no need I suppose with the samples provided. So I go a pint of Potton's Village Bike at 4.3%. And very nice it was too. 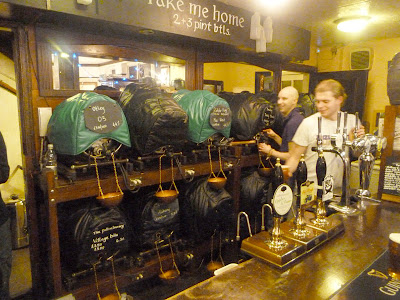 If you're one of those funny northern types and wants a bit more foam on top of your pint, don't worry as there's plenty of hand-drawn beers from the other bar. In fact, the first time I came in I was at this bar and couldn't work out why the beers I was getting brought were so flat. They were very nice, so no complaints but I did enquire - completely unaware of the stillages around the corner. "It's just the way it is" said the barmaid. Of course, the light-bulb went on when I looked around a bit. 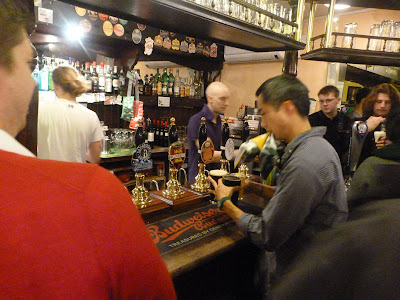 The pub is plain and simple, no jukebox and no fruit machines - they took them out to make room for 2 more punters! And no telly either, although one makes an appearance for special occasions. Just how it should be. 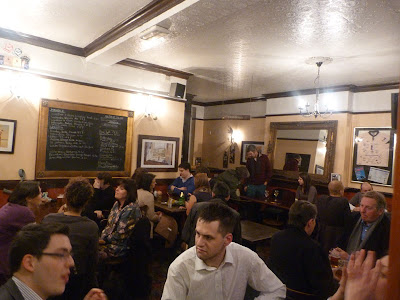 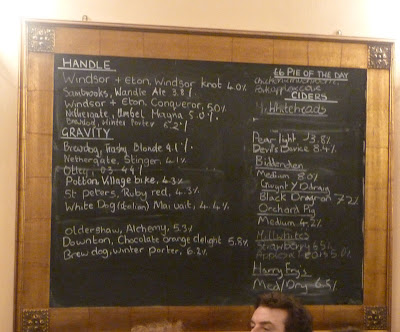 I'm not sure about the frozen glasses, but had always wondered about the pub's rather pretty name as it used to be called The Jolly Gardeners - a much more common pub name (and interestingly both pub names are on Google maps). So I asked the landlord, Craig, while chatting to him - he's a very nice amiable fellow, and is always to be seen testing his wares and mingling with the punters. Just how a landlord should be! Anyways, he seemed proud and happy to tell me so I'm sure he won't me repeating it. Bree Louise was the name of his baby daughter who died at 12 weeks. So now in his own words, "Bree Louise lives on!". Indeed she does. A lovely touch and a great pub. In the best half dozen boozers in London without a doubt. So hurry and pay a visit before it gets knocked down so people can get to Birmingham 20 minutes faster. 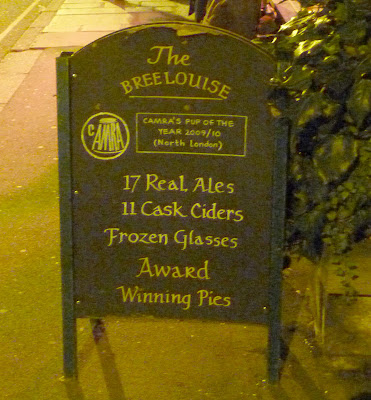