The worst London Pub of all??


I approached this place with much caution, trepidation, and even a little excitement and a soupçon of curiousity.
I'm still confused as to whose idea this place was and what made them think of the name, and I was genuinely expecting to the be the worst pub I had ever been in, in London or without. So let's go in.

It's a huge big empty place, but not as awful as I was expecting. Although I'm not too sure what I was expecting, only for it to be really really bad. My first surprise was the sight of two hand-pumps huddling together towards one end of the lengthy bendy bar. Greene King IPA & Abbot Ale. It still being just past tea time I opted for the IPA, and was convinced it was going to be a rotten pint. I mean, for £2.80 how good could it be?? But it was fine. As fine as Green King IPA can get. And what a bargain. The Abbot Ale was a full English quid more though. 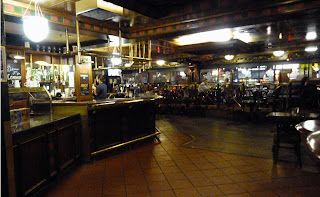 As I sipped and looked around my second surprise - this place wasn't too bad. The NME TV music on the tellies wasn't too loud, and the atmosphere wasn't as horrible as I thought it might be. It was very quiet, a group of lads in one corner and a couple of solo drinkers and that was that. 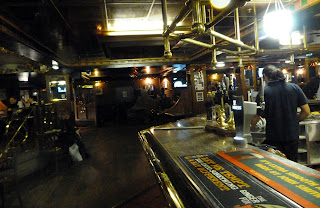 But I think that the pub is serving its purpose perfectly well. It's not for signed-up Camra members, or people interested in wonderful historic pub interiors. For tourists, pub-crawls or Wetherspoons fans I'm sure this pub would do just fine. It actually reminded me a bit of a students union, or one of those pubs that live in 70s shopping centres. So maybe students and shoppers might like it too. And for £2.80 a pint why not?


I didn't want to hang about, but not because it's uncomfortable to scary - I'm sure there's some 'flat roofed pubs' to come that will meet that description, but I just would rather be somewhere else. But having said that, now it's ticked off the list there's really no need to go back there. Unless it's your first trip to London and this is the place you see after a long coach journey... and you don't mind dropped definite articles.