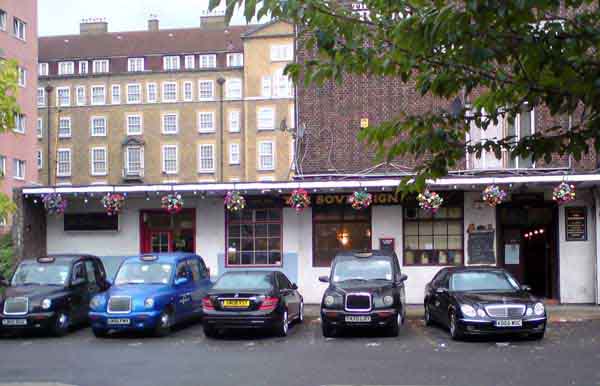 Don't judge a book by its cover they say. And rightly so. But what about judging a pub by its cover? Can the inside of a boozer be determined by its outside? Probably not, but you still do though. "Looks a bit posh...", "What a dump!" etc.
The Sovereign is stuck on the end of a rather run-down looking parade of shops (can you judge parades of shops by their covers??) in the huge council estate mini-town that sits just west of Euston station, so it certainly doesn't look posh. The numerous black cabs parked up outside suggest that it may well be no dive either. And hanging baskets are always a good sign right?

It's much bigger than I thought and, well, much nicer. A proper basic pub interior, which sadly these days has taken as a good thing. I scanned up & down the lengthy bar and asked the friendly avuncular landlord if the hand-pumps did anything No, they didn't. So I went for a pint of Guinness - then the landlord pointed out the range of bottled ales he had, and a bottle of Greene King IPA was popped. Which is worth noting tastes much better out of a bottle than out of a cask!
The landlord disappeared off to one end of the bar to quietly read the paper and mind his own business, and down at the other were 4 or 5 boozers postulating loudly and enthusiastically on matters of the day and local gossip. The conversation was a good-natured mix of laughter, incredulity and the phrase "faaakkkin' ewl!". Presumably they were the cabbies - not drinking too much I hope! I took a few snaps as discretely as I could.

After about half a pint a chap came in and settled at the bar next to me. After a brief chat with the landlord he said hello to me and introduced himself. Eamon. Hello Eamon! Eamon was annoyed because he'd just had an argument in the Exmouth Arms over the amount of change given. Then he asked me to pop into the Costcutter to buy him some fags! He even said I could spend the change on an ice-cream. Bless. When I came back in I mentioned that's the only time I'd done that someone who wasn't a tracksuited yoof! A few moments later I was sat down the end of the bar with the "cabbies" and had been introduced. Dave, Bernie, Gary... I think. Not too sure now. And the very nice landlord Denny (I think) - the best guv'nor in Camden by all accounts and I saw no reason to disagree.
After a little while a few of the chaps had to go, and it was just me Eamon and Bernie (?? I think). So pleasant was it all that I asked Denny to get me another bottle. Offers to pay for it were offered, and I offered to buy them one as one does, I can't remember now but as pub etiquette demands it doesn't really matter who pays for what, as long it balances out. More chat & life stories followed. We tucked into the aftermath of a buffet for a funeral wake that had taken place in the pub that afternoon. Beer and sausages!
Eamon showed me some of the items hanging up around the place, one being a letter about the Denny's dad being executed or shot by the Brits in the 20s for IRA activitites. Like so many good honest boozers the Sovereign is very Irish. Of the four tellies each showing a different sports channel, two of them were Irish.
After more chat, including other pubs in the Borough amongst other things - these are people that like pubs, it turned out that all the taxi drivers were in the cafe next door, the Sovereign Grill I think it's called. Indeed each time the (land/?)lady came through the connecting door by the racks of bettings slips to get something or other it sounded very lively in there.

As I left I was implored to come back. And I will. I think it's another one that's under the threat of closure. Fingers crossed the threat fails. Everyone knows each other, and strangers like myself are made to feel very welcome too.
Eamon says the Sov is the best pub in Camden, and real ale aside I don't think I'll find better. If you like a proper pub how a pub should be for people who like pubs, then you'll no doubt agree.