What better way than to spend a sunny afternoon in Kentish Town than down a side street next to a railway arch. Actually pub or not that sounds like quite a pleasant afternoon anyways. The Camden Town brewery has been running for a while now, first up in Hampstead and they moved down to Kentish Town a couple of years ago I think. I don't really know the exact dates - and they aren't important right now. And now they've installed a bar there too, and today was the grand opening. Ta-daaa!

Is this a pub? Well, not really but it's a bar so yeah, it'll do. So let's continue.


There was a small outside bar, and a larger inside bar. A hot-dog stand provided hot-dogs, and a ready-to-light little 'campfire' type provided a tease that it was going to be going on well in to the night. Which it didn't.
So to the nearest bar, I was advised to ignore the actual pumps handles (another tease, as they looked like ale pumps) - they were either their flagship Hells, or US-Hells. I eventually ended up having one of both for £3.50 a pint, or 2 quid a half. I'm guessing that was just for ease of money handling. They were both very nice as lagers go, and the only difference I could pertain was that the latter was unfiltered - imagine if unfiltered lager catches on with the kids! The whole filtering this funny, isn't it? People drink hazey wheat beer quite happily but other beers have to be crystal clear. The fellow said later about there's 2 types of beer, nice and not nice - it doesn't matter if it's cloudy. (Of course that doesn't mean that a 'clear' beer should be served cloudy!) Inside the other bar had a wider range, but the only other one I tried (knowingly - there were a few jugs providing ad-hoc top-ups knocking about) was the Ink Stout, which is very nice indeed.

Just after I'd got my first pint a tour of the brewey commenced so I tagged along. I found afterwards - I think - I was supposed to book, which I hadn't. Sorry Camden Town! When I've been on the brewery tours in the past I've found them very boring. Hoping to leather-apronned fellows shifting malt malt from A to B with an old wooden shovel, and oak caskes being rolled around amongst bubbling vats of steamy yeasty brew... but of course it it's nothing like that. It's all stainless steel and pressure guages. But the Camden Town guys - Jasper & co - were so very engaging and friendly that it was very enjoyable. I even learned a new fact about malt proportions that go in to stout. Education and drinking go together rather well!

The whole bar had a bit of an American feel, nothing wrong with that of course. And the crowd were all on the young side. Young men with bushy beards were common-place. Nothing wrong this either. The hot-dogs looked very nice, although I didn't try one. Something wrong there! The queues everywhere fluctuated from very long to nil - except for the ladies loo, which just remained long. A good way for a gent too not impress the girls is to go for a leisurely no.2 while a bevvy of lager-filled lovelies wait outside . Someone mentioned a band wouldn't have gone a miss, and they had a point but I'm glad there wasn't one. Friendly conversation was everywere, I'm sure everyone knew everyone by not too many degrees of seperation. I hear they plan to do more of these, which is good although I'm not sure if the crowds would quite so large if it hadn't been such a gloriously sunny day, but it was so hoorah for that. It was like people were toasting spring sprung.


I'd always been a bit dubious of the Camden Town Brewey, although never 'anti' or harbouring any ill-will just more a bit of a shrug, mainly as they're now concentrating on keg beers. And am always a big niggled by the fact that they've never been based in Camden Town, and I've always suspected that their name is just an attempt to sound trendy. But after a very pleasant afternoon with such very charming and friendly hosts I have really warmed to them. I'm quite happy that Camden has a decent sized small brewery, producing good beers (and hinting at some future ales again!) on the coat tails of Redemption, Mean Time and Brodies - who all do produce fine ales. Although I'm not sure when I'll be drinking the Hells lager again, perhaps some bottles on a summery Heath afternoon might go down well - or more likely on another day like this, but I really really hope they do well. I like the way they're on pally terms with other small breweries, which I guess isn't uncommon in the craft brewing world. There's plenty of room for all of them - and a penny out of InBev's pocket and in people like Jasper's I don't think anybody would not want. The trouble is that when little breweries get big, the big brewer's often get on the phone to the take-over lawyers. Stay Ltd Camden Town, and thrive!And brew some ales - less profit than lagers but better for the soul. 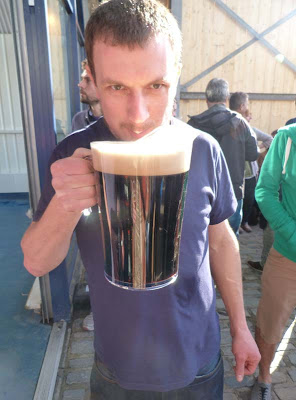