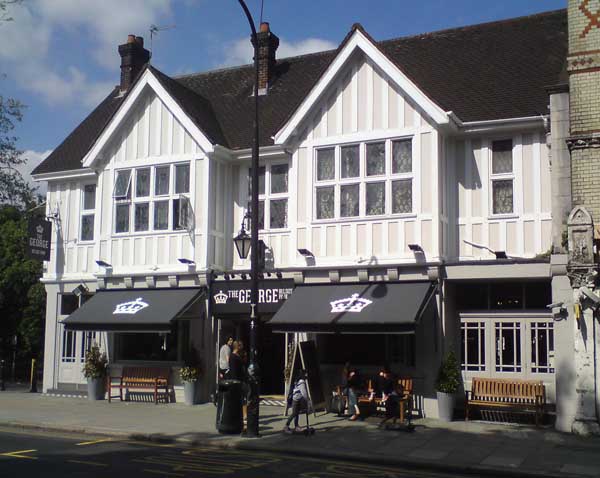 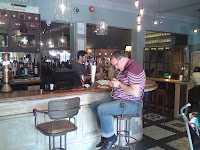 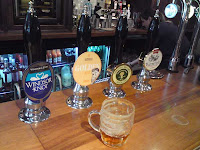 I'm not a fan of refurbs, and this one seems to have been done by a recent interior-design graduate with big ideas for their-first-pub, with the brief to attract more women. It's a right mish-mash, part lounge, part dining hall, part vague-Southern style juke joint, part bric-a-brac shop, part... well, part something that inexplicably has luggage racks - part-railway carriage?? I suppose the designer had been in the Parcel Yard and thought "I fancy a bit of that!". Most peculiar.
But it all ends up feeling like being in a Edwardian dolls-house. It seemed to have worked though - I didn't count, but I'm sure there were more women and children than men. Not a bad thing one probably has to say in these enlightened modern times, but I don't think that the law of the life-boat or coffee morning makes for a very good proper-pubby-pub. It is very gastroey though having said that. 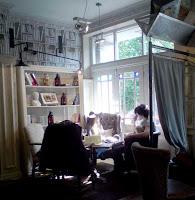 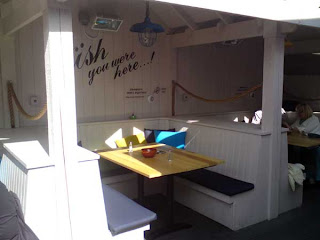 As with most refurbs they made sure to refurbish the price list too, with a pint of Clarence & Fredericks Golden Ale leaving 10p change from 3 quid. It was very nice though, and that a barman was waiting patiently behind the barmaid as she finished serving me to ask me if was being served made me feel popular.
In the small & mainly covered smoking yard they have reintroduced the old 'call for service buttons'. If their card-payment readers work out you need never leave your weather-proof seat, unless nature demands it. Although... they are weather proof....!

I won't be rushing back, but it's work noting for the stuck-in-the-past anoraks that I believe that this pub has more incandescent light bulbs in it than any other on the manor. I counted at least 40 - if you count more in a boozer please write in!