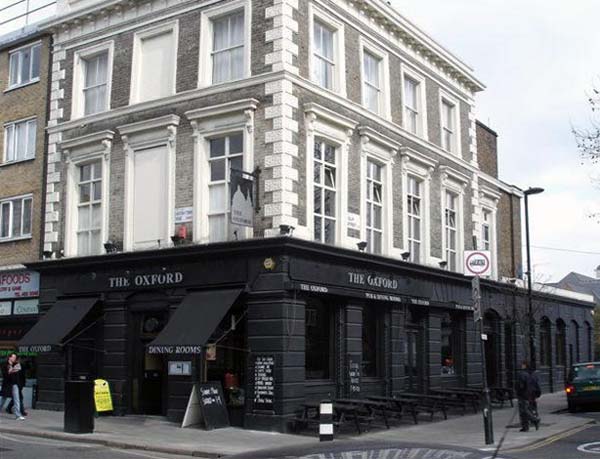 I have friends who work near here, so I have to go this place fairly often, well a lot more often that I'd like.Why? Well, I don't like it. Why? Well...

It calls itself The Oxford, rather than the Oxford Tavern. Annoying but not a capital crime I admit. But on its website it calls itself  "a pub & dining." Yup, it's a noun and a verb. Such intentional inane mangling of Queen's English should be capital offence.

It's expensive, but the beer's generally ok. The bar-staff are oh-so-cool. Oh-so-cool. It gets crowded inside and in the summer it gets crowded outside too. Even on the dirty business pavement.

The furniture inside is of  the bare-wood shabby chic type, that looks trendy if you think it should, but is otherwise uncomfortable and wobbly. Big dining tables don't work in pubs! Ahhh but this is a gastro pub, and so proud of said gastroeyness is it that it has the open kitchen behind the bar, resulting in the whole pub stinking of fish & chips. Not an unpleasant smell in a chippy, but pretty rank in a pub.

I don't like The Oxford, but it loves itself more than enough to make up for that.
By Albert Trinker on 22.6.13