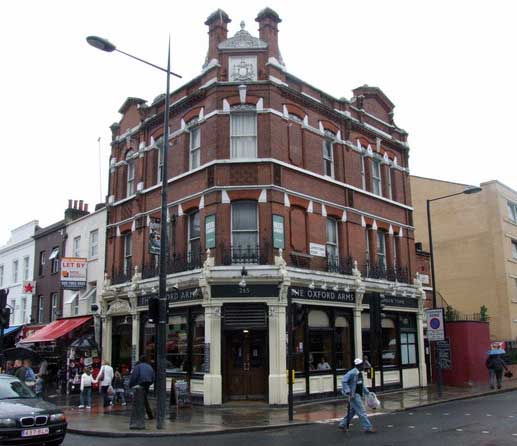 When I first came to Camden we'd come here drinking a lot. No idea why - it was just easy I suppose. It's pleasant enough. And open late back in the day when this was a rarity - due to the theatre (upstairs) licence I think, not I've ever been upstairs mind. Always seemed to get talking to people in there - usually tourists. Some Spanish friends came to stay and we brought them here especially. I suppose there's worse pubs to go to. They didn't get any fine English ale though - cos there ain't none.

The last time I went was after a quiz, and despite not taking part I was still entitled to the free quizzers' food they were dishing. Sausage, chips and beans on a paper plate with a plastic fork. It wasn't the best pub I've had, but it was free and food served up after pub games nights is a night thing that you don't often see in London.

Not the best pub around, but not the worst by a long shot. Just nothing special - and doesn't have to be with its prime location on the High Street. Still, it's a lot better than it's near namesake on the high street in Kentish Town.