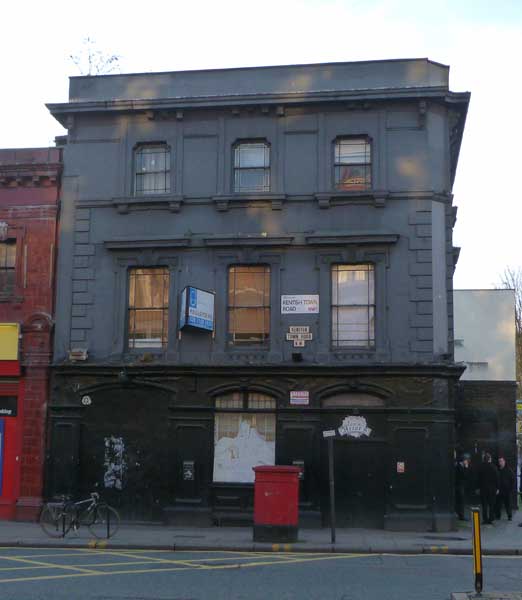 I remember walking past here years ago and spyed peering out from one of the upstairs windows a lovely looking boxer dog taking in the Kentish Town airs. What a handsome dog I thought!

The Castle Tavern as it was for hundreds of years as good honest no-nonsense boozer, but the Verge or the Bullet Bar or the Flower Pot or Heroes as it has been recently was a hip & dirty yoof-centered music venue and as result is shut now. Surely the most names in the shortest time for any pub in the borough - a sure sign of desperation. But what is to become of it now... who knows?!

A claim to fame of sorts was that it was the only music venue in Camen whose stage had a drum riser. And I only ever went there to see the odd band. Or perhaps for a late drink when dragged there, not that there's much to drink apart from lager - probably in plastic glasses.
I went along to a gig with a newly-met young lady once who proceeded to tell me what she once got up to in the toilets once. Lucky fellow I thought.

When I looking for somewhere to live once, I went to see one of the rooms upstairs. I would have taken it but was beaten to it by a Swedish friend. Probably a good thing - I would've hated it, despite Monkey - the adorable boxer - slobbering me to bits as I shown round.
By Albert Trinker on 10.1.13