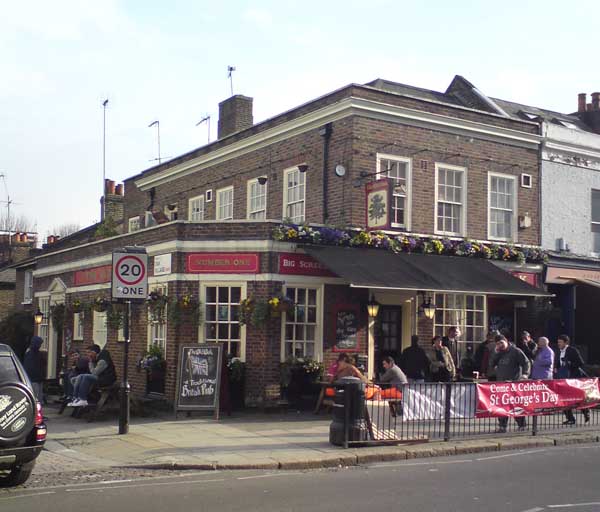 A real local's pub for local people, from the huge local esate round the back. It looks quite big on the outside, but due to the toilets taking up a large block inside and the bar & kitchen running the full length of the pub it's not really that big inside. And it was quite busy with the kind of people who are probably very nice, and won't bother you if you don't bother them, but if you're some daft little twerp writing a blog about going in pubs and that's why your holding a camera-phone up in their faces, they probably wouldn't be very impressed. Or that's my impression. And that's why there's only two similar and rather useless little photos that I'd tried to sneak from over my Camden New Jounral. 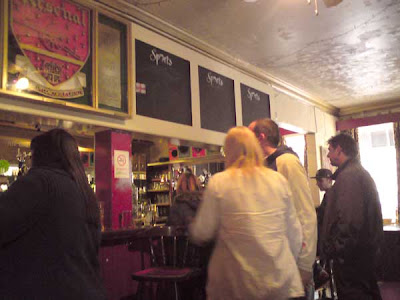 First thing... the Old Oak is loud. The jukebox was booming! How anyone manages to have conversation in here I don't know, but there were. It was only me not chatting away.
I was quite expeciting this gaff to have no ale, but I was wrong. Bomdadier and London Pride were on, and at £3.10 the Pride was perfectly ok. If I had 20mins to kill waiting for a train across the road from Gospel Oak station I'd probably pop in for another one. 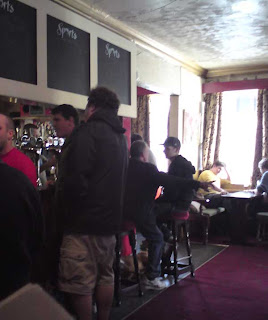 On my way out I noticed that the chap here in the baseball hat had dropped his phone, and it was lying by his large dog's mouth. I stooped to pick it up for him, and suddenly occurred to me that it might the dog's toy! But no, it was his. He was very appreciative and his dog gently nuzzled and slobbered on my hand. You see, nothing to be scared of!
By Albert Trinker on 15.4.12