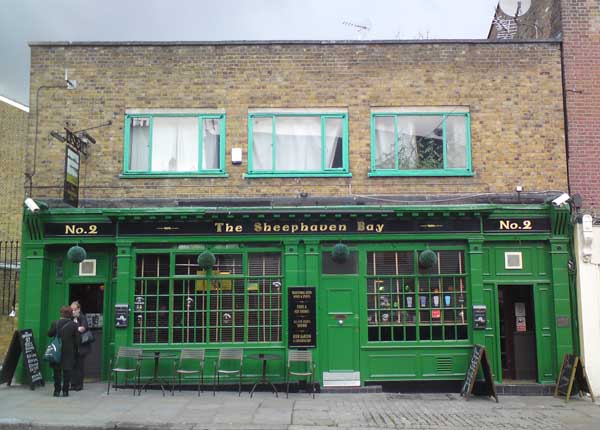 I wish I'd gone in this place a few years back when it was the much more meaningful Mornington Arms, and if I remember correctly it was red. But now it's the meaningless Sheephaven Bay, which I assume is the boss's Donegal hometown. Good for him.

So in we went, and not immediately spying any handpumps I asked the French barmaid if they had any ales... "Hmmmm yes" she said "we have Fosters, Stella, Guiness, Carlsberg" or words to that effect, gesturing towards the little electric pumps. Oh well, not her fault. A pint of John Smith's kreamy-keg was ordered. 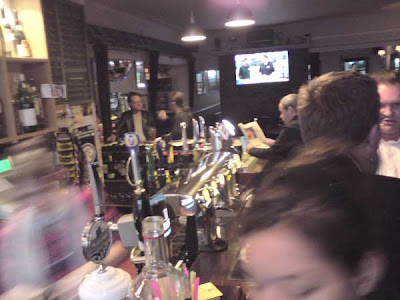 My drinking buddy is French so she was chatting to barmaid quite happily, but then disaster stuck!! She was called away  to work! Drat it. And then annoying behind a jar of silly gaily coloured drinking straws I saw the handpump I was looking for earlier!! 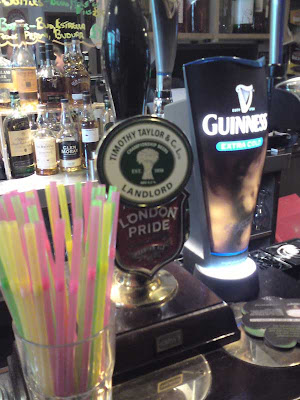 Timmy Taylor's Landlord and London Pride were on offer. Nothing special but still better than my keggy machine beer. How annoying! I thought about telling the barmaid... but thought twice. I guess I should've looked more earnestly. It's all my fault right? Then the other barmaid, Spanish I think, put a settling pint of Guinness on a funny little stand that lit up. She couldn't explain why though, other than that's what people like to see. Do they?? We were the only people that could have seen it anyways. 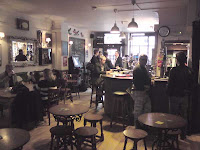 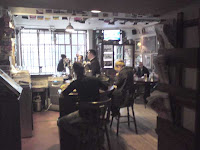 From the outside it looked like it might be dead inside, and perhps a bit rough and scary. I'd only been once before after the grand re-opening, and wasn't particularly taken by it so have never been back. But it's actually quite cosy and friendly. I must remember to look for the ales though next time I'm there.
By Albert Trinker on 9.4.12