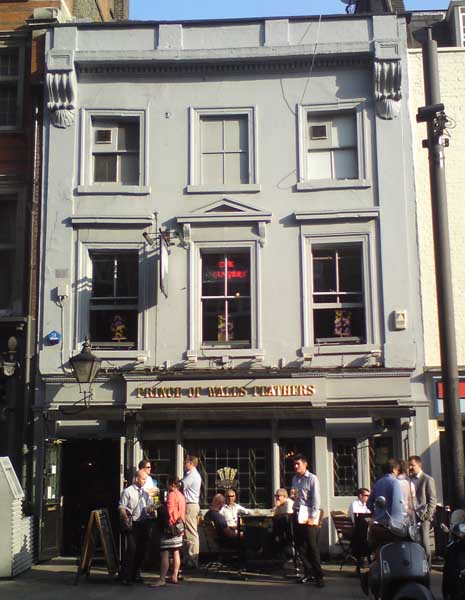 Once upon a time a father from Woking took his young lad to a talent contest in a pub. There he was 'spotted' and ended up in a cabaret group called the Highlights. They went to Butlins, and met a band called the Spectres - got together and Status Quo was formed. The yound lad was one Ricky Parfitt, and the pub was one Prince of Wales Feathers. So we should be very grateful for this pub! Imagine rock n roll without it. Scary. So it's apt one pays tribute to one of the most important pubs in musical history! 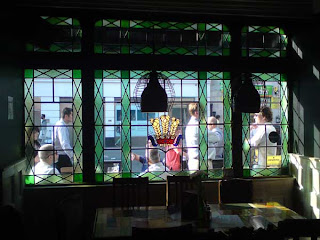 The Adnam's Fat Sprat at £2.10 a half was dear but nice. The stained glass windows were nice.
Outside was busy and inside was very warm, so wandering upstairs to the loo I noticed an open door leading to the roof-terrace, complete with picnic table. So I popped myself in the sunshine, paper, peace and quiet. 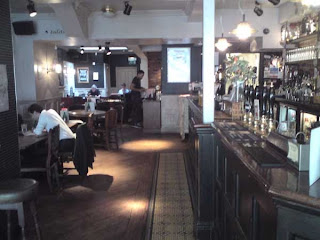 Until the barmaid who'd served me earlier came out an announced with all the tact, charm and regret of a shrill alto-RSM barked out "Sorry - staff only here!!" and marched me back inside. So I went back down and there was still no space on the beer-pavement so I propped up the bar instead, when the barmaid came up to and asked me what I wanted, despite having served me 5minutes earlier and still having half of it in front of me. "Oh - you were looking at me" she said. How odd.

Anyways, there you go. Go and drink to Ricky Parfitt!
By Albert Trinker on 9.7.13