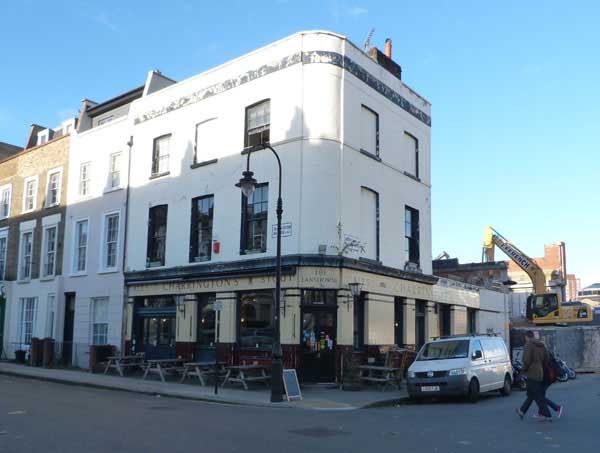 A fine exterior to the Lansdowne. You'll agree it looks lovely. But that's just about the only good thing to say about the Lansdowne. Once you're inside it's awful. As gastro as you could get, but I suspect the food isn't much more than thin organic stone baked pizzas. It's furnished with huge 'rustic' wooden tables like they might have had in Victorian workhouse canteen, and the result is that you're sat further away from the person  opposite than you are from the person behind you. And people also have to try and squeeze through that gap too as they navigate round the place. The result is rather uncomfortable. A proper pub shouldn't have big dining tables any more than it should have low slouchy leather couches.
The clientele are trendy hip types, probably as unbearable as they look. They sure are loud.
I once got dragged here from another pub by a mate who was meeting his rather dull & yet pleased himself mate, we had one pint there - he asked me why I didn't believe in God as he was undecided - and then went back to the other pub. I suspect he was buying something not entirely legal. The folk in there look like still think a couple of lines on a weekend is a wonderful thing.

Basically quite charmless and boring, favoured by charmless and borish people. But it's there's a lot of them about as it's always busy. Other then nice tilework the only other good thing about it is that's still on the corner of Dumpton Place - not Jasmine Mews. I do wonder who Mr Lansdowne was though?
By Albert Trinker on 3.11.12