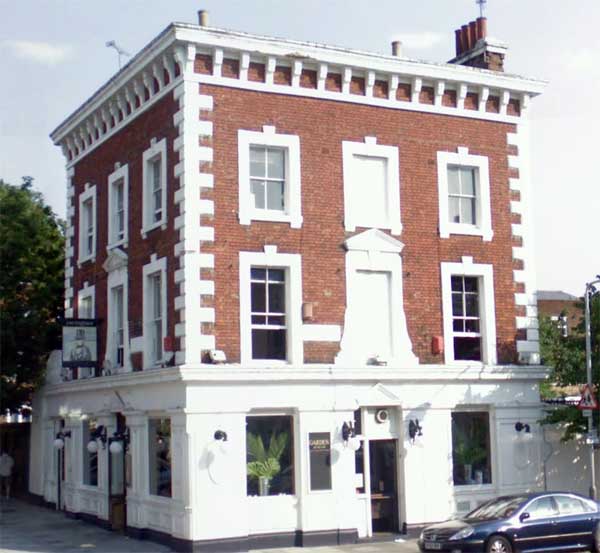 A little while ago a few of us were out in the Primrose Hill area and we popped in the perfectly good Albert but unfortunately there was a quiz on and we all fancied a natter, as you do. Question 1 - what ruins a good night out in a pub? Answer - A pub quiz! Stupid things. So we went round the corner to The Engineer for our drinks instead. Bit of a mistake really as it's basically a restaurant masquerading as a pub. Barely even can claim to be a gastropub really. And at nearly 4 quid a pint it's an expensive place to be when it's your second choice.

The thing that annoys me is that the pub sign shows one Mr IK Brunel. An engineer of course, perhaps the best engineer of them all. But he had nothing to do with much round here. But of course he's the famous one that will appeal to most people wondering why their fancy posh eatery has such a prosaic dirty-overalls name. The name was probably more to do with the almost unheard James Morgan, or perhaps even the very heard of George Stephenson - both of whom literally changed the landscape surrounding the gaff. To use IKB as their mascot is a crime - especially when he's stood in front of his Saltash Bridge, straddling the Devon / Cornwall border, pretty but hardly local. And the thing is - the engineer sign is the best thing about The Engineer.
By Albert Trinker on 20.11.12