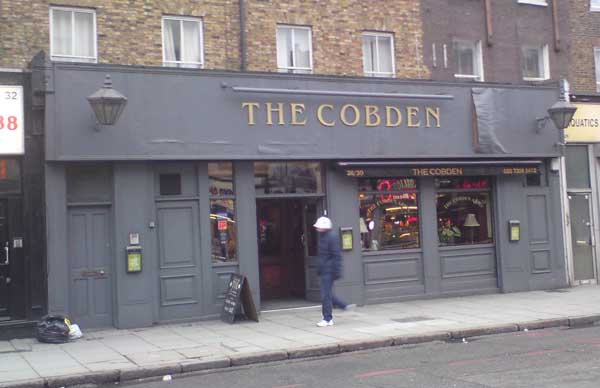 The greyest pub in Camden? Perhaps the owner has a mate who works in the battleship paint stores...? And what happened to the Arms? This used to be the Cobden Arms, I'm sure. Anyways. The Cobden (Arms), named after a bloke who has one of the biggest statues in Camden and a Camden school named after him but as far as I know has nothing whatsoever to do with Camden. 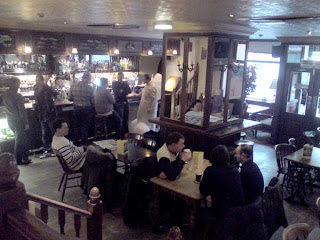 But if that was going to put you off for some reason then don't let it. Down this end - the rougher less touristy end - of Camden High Street there's not a great choice for the discerning drinker. Much like the other end really, but at least this end is lighter on tourists. The Cobden's not a bad little place. Not a bad little pint of Greene King IPA, not a bad little bar maid, not a bad little atmosphere - and not a bad little heater over the door. Everyone seemed to be huddled over their tables as in top secret  discussions, but I suppose that's the nature of drinking at a dining table.
There were some drunken rowdy Scot at the bar, possibly on a stag night - one was dressed as a cock & balls. Some student types sat by me - I wonder if they found bench too high for the table too - and started perusing the omnipresent Thai food menu. I left before they ordered the spicy sizzling stink drove me out. But I'll no doubt be back. Who-ever he is.

Probably worth a mention is arguably Camden's finest bluegrass night - The Blue Lion Sessions - is here twice a month. Yeeha!
By Albert Trinker on 5.4.13