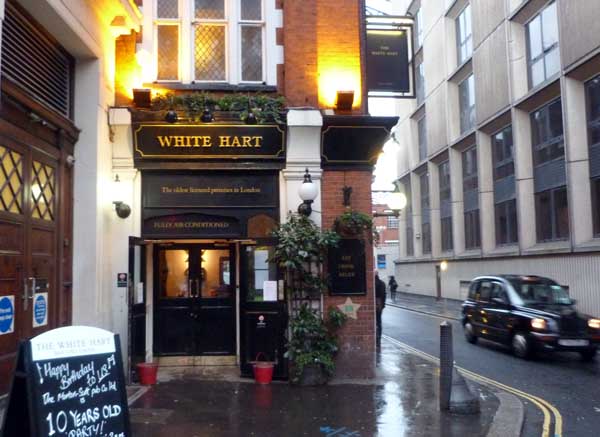 The self-proclaimed oldest pub in London! Well, oldest licensed premises. And it currently celebrating its 10th birthday, so go figure as the tourists might say. Anyways - intriguing enough, so let's find out more! 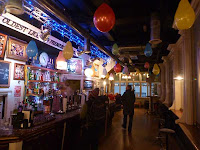 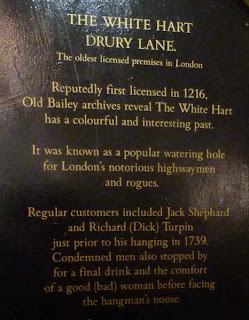 It's jolly affair inside, with balloons and groups of young 'uns having noisy fun. The far end looks like a sort of Greco-Roman themed room done on the cheap from a garden centre's closing down sale.
It took a little while to get served considering how quiet the bar was. I put this down to the length of time it took to mix Jack and cokes - it's not an art-form girls! But said girls were very nice.

You have to pass by all this to get to the "history board", which are normally proudly displayed outside to tempt the historically-interested of us in. But you're in as far as you can be by the time you see it here.
Disappointingly it begins with "Reputedly...". Hmmm I see. And then the only spot of originality in the pub's bio is the spelling of Jack Sheppard's name. I presume they mean he of Newgate-escapee fame, not the character in Lost.
Anyways, I'm sure Jack and Dick did frequent here - but what about the other London pub usuals!? Nell Gwynne? Dick Whittington!? Charles Dickens? etc etc. But I doubt whether this was their final watering hole as it's mile from Tyburn and not the closest hole to Newgate. But I was the only who seemed interested in such contrived feeble heritage-twaddle so I suppose it doesn't matter much. A board with the history of St Giles would be much more interesting.

Everyone seemed to be enjoying themselves, and the beer was ok. So there you go. Probably a good place to hide here - I'm sure Jack Sheppard knew that already!