Yorkie - it's not for girls! 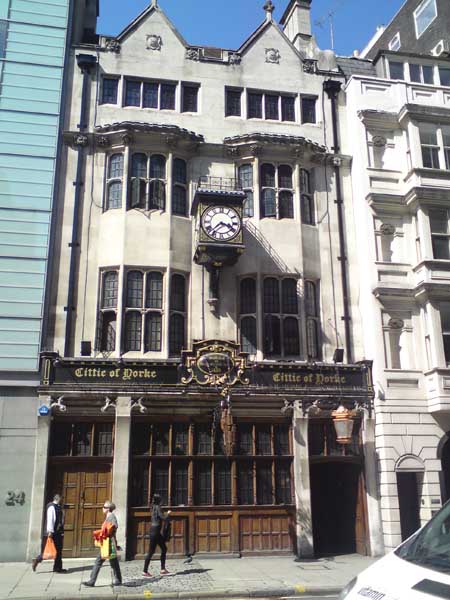 One of those pubs that claims to have been around since Noah... and who knows it probably has. That term 'on this site since...' is alway a bit vague - but I don't mind it at all. Still gives a nod that there's a pub and pubbing going on that spot since whenever they say. Since 1430 something or other anyways, but I'm not sure how much of that you can still see now. I don't think much of it is older than 20th Century. But who cares - it's a rather nice and 'unique' boozer. Not unique in a quirky or contrived way, just a bit not what you might expect should you walk in through the anticipation-building hallway for the first time. 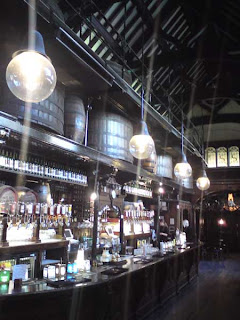 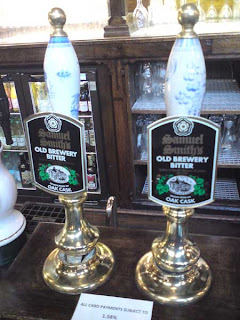 The first thing that you notice is the huge barn or church like main bar. Very impressive. Then you see the Sammy Smith's pumps - oh! It's one of them. But I don't mind that a bit - tis good cheap ale, even though a Sam Smith's house can be a bit like a thinking man's Wetherspoons sometimes - and I suppose there's nothing wrong with that either. So anyways, a pint of bitter please young Ozzie / Kiwi / Saffa lady, or whatever you are. And stop smirking while I take a picture of the pumps, please? Some of us have nothing better to do. Thank you! 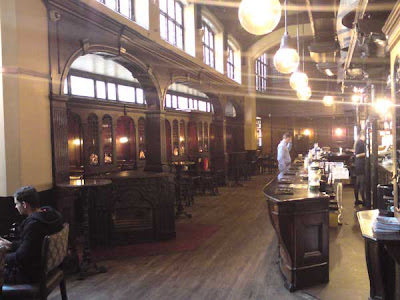 There's lots for the eye inside. Firstly the huge incongruous barrels over the bar. Why? What for? How..? Why? Never mind. The other nice feature are the boothes where a young couple can pop in for a bit of privacy, or perhaps legal eagles from the nearby inns of law can pop in and discuss detailed legalled issues, or exchange Bar gossip away from the bar?
My favourite thing though is the triangular fireplace - you can see it in the photo above. Completely free-standing, it has no flue! How does it work?? That's for you to figure out. I've never seen it lit on numerous visits though. 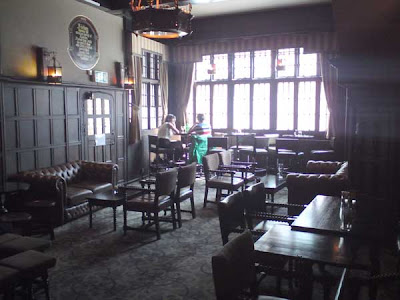 At the front there's a rather comfy, mock-tudor lounge / dining room area. Which would have been very nice had the two young ladies in the corner by the window had shut up for one millisecond. Now, I like girls as much as the next man, but why must they invade every moment of blissful silence with the most banal dimwitted claptrap? After a few minutes my annoyance passed from their mere talking, which I shouldn't really get annoyed about but to their topics of conversation. My mind was boggling at the trite & trivial hokum they'd decided to fill their afternoon with. Thankfully I've forgotten most of it, but a sudden and seemingly umprompted lengthy passage concerned whether they could keep the door next to them open somehow. One thought they could because she'd thought seen a hook, and the other just postulated how nice it would be if they could. At no point did either get up a inspect the door or indeed try to prop it open somehow. Then as suddenly as it appeared that topic disappeared and the next one came along, shoes or Olympic tickets or Madmen or some such insipid crossword-interfering nonsense. I should have gone back to the bar really. Once at 125ft the longest bar in Europe, not sure if it still holds that claim now though.

The Cittie of Yorke is nice. Go! Just don't sit near gossiping crones.