THE PRINCESS... of Wales


The Princess of Wales in Primrose Hill used to be a fairly decent unpretentious boozer, called 'THE PRINCESS OF WALES' but now after what looked a huge tart-up, scaffolding and everything, it now seems to be called 'The Princess of Wales'. Which is most curious, you'd think with such a famous name as that they'd be flogging it to death. The sign used to show a nice portrait of a proud and elegant regal looking woman - Anne of Brunswick? Alexander of Denmark? or Mary of Teck even...? I don't know. Now it looks like it's from a cheap children's history book.

The beer choice was London Pride. The customer base seemed to be in pushchairs, accompanied by sun-tanned dads and yummy mums. But thankfully the London Pride was well kept. 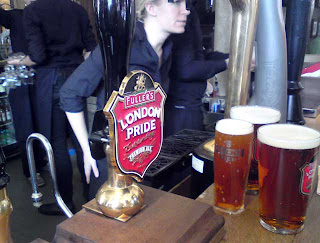 The bar-staff were an interesting bunch, it's one of those places where they all have to dress in black.  Perhaps with 'The Princess of Wales' embroidered shirt, although I might have imagined that. Always a reason to suspect a pub's manager I reckon. I have nothing against black I hasten to add, but when I see bar-staff in a uniform it always makes me wonder "who is the manager trying to impress?" and "Why doesn't he have other things to worry about?" Worse though, they were very attentive when you didn't want them to be - ie. faux-patiently looking at you waiting for your order when you're stood at the bar with a 3/4 full pint glass but then doing their darnedest to chat or look out of the window or move glasses from one shelf to another when you're frantically waving a tenner at them. Such is the trouble with young bar staff. And the look that one gave me when I asked her if she wouldn't prop the door open! It was very cold and very windy, I wish the wind had changed at that very moment. 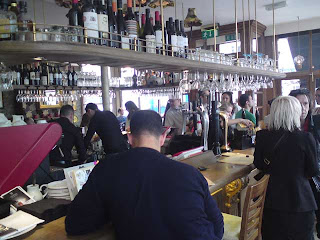 After a little while a band turned up. The drummer took forever to set his funny hi-tec drumless drumkit up, but once they started they were very pleasant in a light-jazz loungey kind of way. The singer even thrust the mic into my face when she caught me whistling along to the whistley bit of Sitting on the Dock of the Bay. I hope I impressed her! 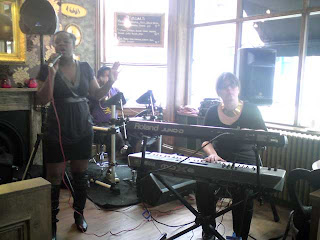 The band were nice, and beer was passable. But the best thing about the place was the 'Oxford Sauce' on the tables. Ordinary brown sauce is not good enough here! But it was very nice, and I've gone a located a buctchers in Hampstead that stocks it. So thank you 'The Princess of Wales' for your saucey tip off.
By Albert Trinker on 4.7.12