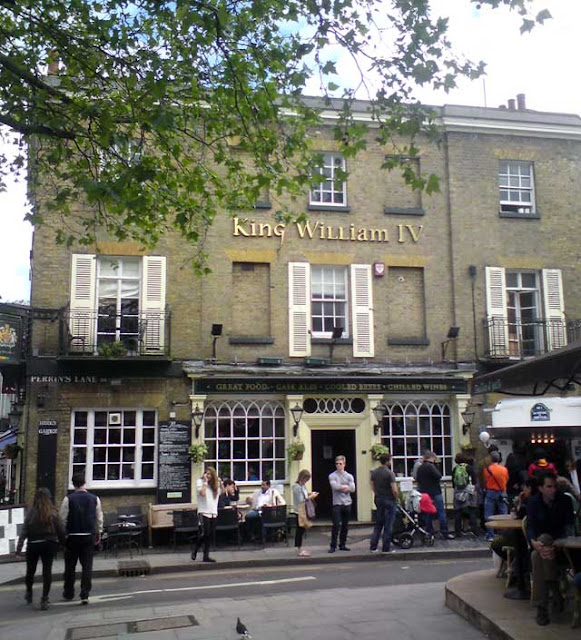 This appears - or I'm sure they'd like you to believe - to be Hampstead's only gay pub, with it's rainbow colours proudly displayed outside, like a Richard of York proud banner. Or should that be gay-friendly? What's the difference? Does one merely tolerate gays as the law says to, and the other encourages outrageous campery and rowdy same-sex intimacy? These are things to be kept at home, much like opposite sex intimacy. If you can't smoke in a pub, why should be able to kiss with a bit more gusto than it strictly necessary?
In my admittedly limited experience of gayness, I'd say that all of Hampstead's pubs are most definitely gay-friendly, at least to say I've seen nothing to contradict that. Two of Hampstead's loveliest and most entertaining and charming characters ("Oh yeah, I used to know Helen Shapiro and the Krays very well...") are regulars up the road at the Duke of Hamilton. So what makes this place so gay? Cynical marketing? Or the place where the gays did have to come on the sly back when such things were frowned upon, and they still after the elusive pink pound? I have no idea. 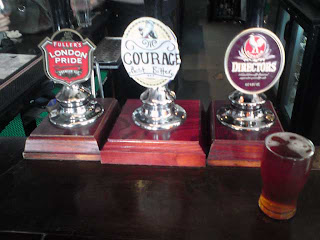 Last time I came in though there was a wonderful old gay at the bar, he must have been 90, had knarled old hands so arthritic like ancient oak roots, he could barely hold his beer. But you could imagine him flamboyantly ruling Soho back in the 50s, with many a tale to tell.
On this occasion there were no such charms. The glass of Courage I had was awful. If I was going to stay I would have changed it, but the bar-staff are those bar-staff who seem very much more like bar-staff than pub-staff so I didn't really care to trouble him. 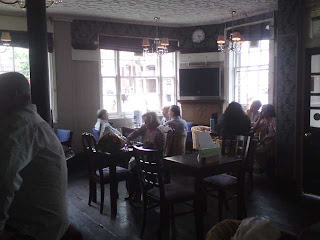 Inside feels odds. For a place so full of windows, it seems so dark. And for a place so big on the outside, it seems to small. Not small and cosy but small and cramped. Confined! Claustrophobic! C-this, c-that.
On the other hand, the beer garden is very nice. And that's coming from someone who doesn't like beer gardens very much. Although the red and black bulls on the wall outside made me wonder if I wandered out into a different pub's back yard.
Anyways, that's enough of that. I don't really like this pub - I'm sure some people do though, there were plently of folk in there - a mix of tourists waiting for the crepe queue outside to die down and a few chaps who looked like regular pub regulars. But I didn't finish my beer. I reckon there's much nicer places not far aware to go drinking - if you're gay, not gay, or even not sure. 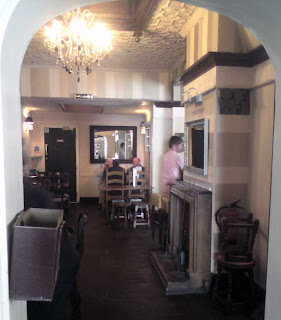 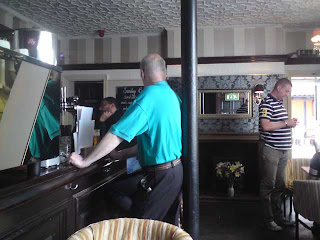 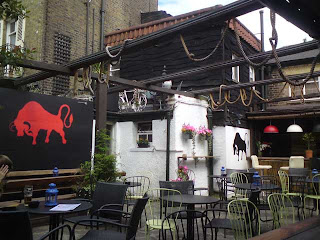