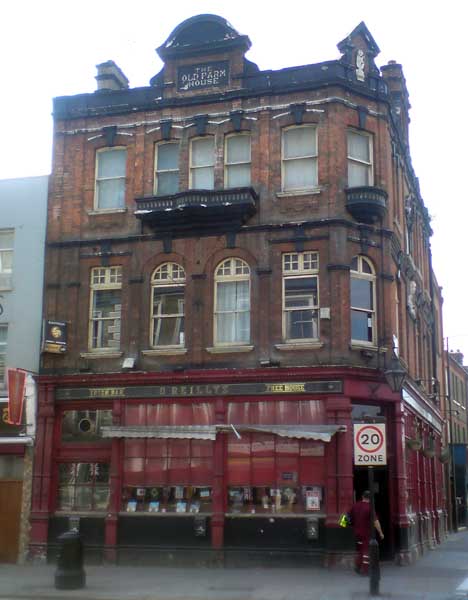 The Old Farm House eh? I thought that Old MacDonald. Rebuilt in 1885 I think it says round the corner by a cute little statue of an owl. I wonder what the owl is about too. So much history here! And I've only just noticed that other little stucco figure on the top corner - I shall look closer next time I'm passing. 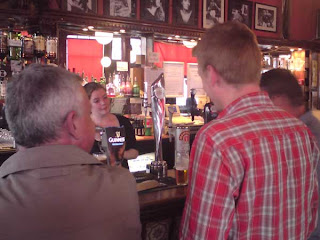 O'Reilly's is an modern old-fashioned Irish boozer. Bit rough, no frills, no ale, Sky Sports, no nonsense, fools not suffered - but very friendly. We all had a Guinness, it was that or keggy-flow John Smiths. We had a laugh with the barmaid, and a laugh with a couple of the regulars. That's the kind of place this is, for drinking and for a crack. Or craic or however they spell it. 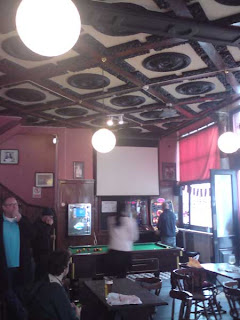 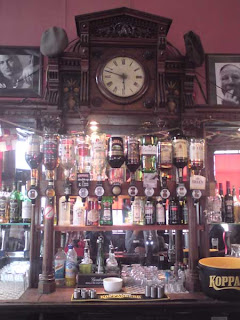 The ceiling is marvellous, and clock behind the bar rather nice too. The barbershop-window-style portraits of Irish heroes are nice too, I think that's Bono and Jack Charlton either side of the clock. Neither of whom I who actually like to have to meet in a pub for real though.
Hopefully there'll always be enough no-nonsense boozers round here to keep this place open and keep it no-nonsense. I'm sure there were loads up & down Kentish Town High Road a few years back, but now they've all been gentrified up and gastro'd down and generally ponced about with and ruined.
Another nice feature and, as far as I'm aware, the only one left in the Borough is the jug & bottle window. (On the left hand side of the front above the litter bin). This would be where people, often house-wives, would come along for take-outs for 'im in-doors, or even bring a jug to top up for him - to keep him at home  and so a lady would not have to step inside a pub. Basically a convenient bit for off-licence sales. Read more here if you like. I'm sure there's no others left in Camden - prove me wrong!

And pop in O'Reilly's, it's ok if you don't require ale or anything la-di-da.

Update... 31st July. The stucco figure at the top is in fact a flower. Obvious really when you look at it. Nice touch though. And the lettings board seems to be just for a flat or space upstairs.
By Albert Trinker on 26.7.12