A nice looking building, and I'm sure it was a nice place too once. But now it isn't really.
The first thing I noticed is that despite the size of the place, most people in there were clustered round the bar making it very difficult not only to get to the bar but quite tricky to get in the pub. They looked like local office workers having a post-work Friday drink with people they weren't used to socialising with, in a place they didn't really like. Just go home and go to a wine bar with your own friends and we'll all be happier! The area round the bar was also the only part of the pub that was unlit - indeed dark. Maybe they had homed there like that school experiment with woodlice.
Once at the bar more difficulties ensued. Firstly, there was no cask ale on. Grumble. In fact no hand-pumps at all to be seen. But as there were no bar staff to be seen either, except the one who kept coming & going carrying a bucket wearing rubber gloves, I guess it didn't really matter. 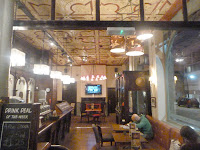 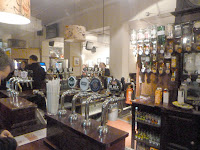 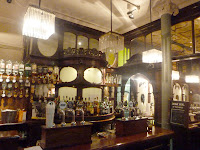 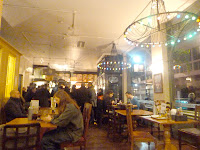 So I got myself a half  of Tetley's SuperSmoothCoolFlowCreamyJiz or whatever they call it. £1.50 it said on the pump but the computer said £1.55. There were some nice architectural features, like the ceiling in the old part of the pub and a strange round lump behind the bar - I guess some stairs go down to cellar there. I sat down by a front window to watch the world going by, and to watch a girl at the next table doing card tricks. And also to notice that on the next table to them, the previous diners had left the piscine portion of their fish & chips almost completely untouched. A warning perhaps to would be chippy-tea-ers?
The rest of the pub, a modernish extension is pretty plain, except for some interesting olde photos of Euston station, and London of yore. No pictures of Stevenson's Rocket though, which is where I suppose the pub got it name. But then again his Rocket never came anywhere near the station that he built. I think the "Catch Me Who Can" would be better name if a boozer wanted to celebrate pioneering local steam locos! The built in DJ decks behind the bar were glady not in use. But just in case they were about to be I downed my creamy keg gloop and departed, only to see the window engraving below. You'd be better off in a Wetherspoons.