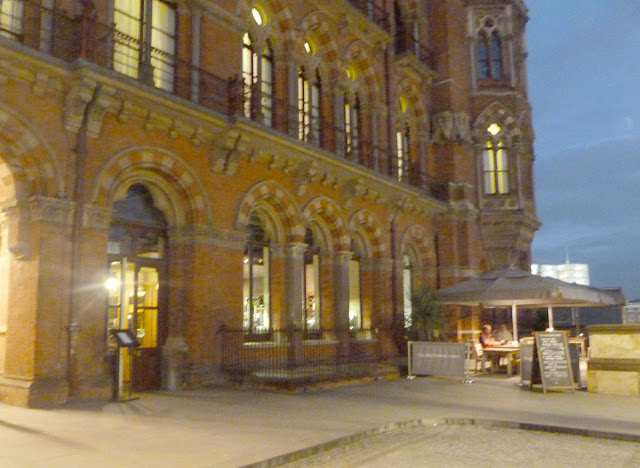 I've no idea what was here before they did up St Pancras station. Or the Midland Hotel. Or whatever this bit is... but does any pub in the borough have a finer exterior? I don't think so. The large beer-patio is nice in summer too, it gives you urban buzz and being surrounded by traffic and noise and hubbub but without actually being suffocated by any of it.
It's rather nice to be going back to the times of naming pubs after local / national celebs, politicians and such-like and who have done well. Sir John Betjeman as we all know did more than most to prevent this - one of London's finest buildings be Eustonized in the 60s. So the least we can do is rub his bronze tummy inside the station, and then go for a drink in the pub named in his honour. 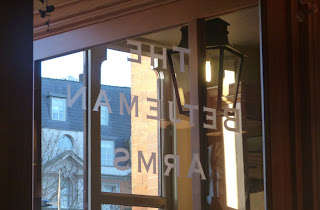 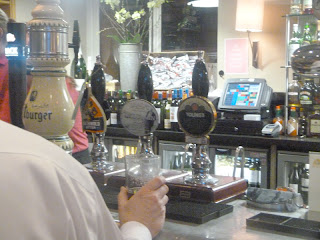 Not a huge range, but enough to satisfy the tourists, lunching-businessmen and travellers with 20 mins to spare before the Midlands departure. I opted for a Southwold bitter - and was rightly corrected by the barman for my pronounciation. Inside it's not nearly so pretty, it's all very modern and 'designed' but at least you still get to look out - or rather look at - Gilbert Scott's windows. If you can see over the stupidly high bar. Or you can sit out back on the other patio and admire Barlow's shed.
Our first choice of seat was next to an open door with a chilly gale blowing through it, but despite the note on it requesting that passers-through close, it refused to be closed and sprung open each time. So we moved on when we saw a couple of middle-aged business looking types leaving. One took so long to stop arsing about with his scarf, pile of papers, Blackberry and being careful not to acknowledge us waiting at all my friend had already sat down, having to wade through the mountain of crumbs he'd left. Annoying man.
No tour of the Midland Grand is complete without refreshments, and this place is a lot cheaper than the booking office tea rooms across the way. 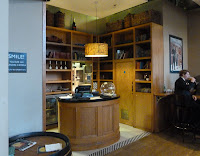 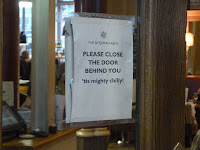