A Victory is lost 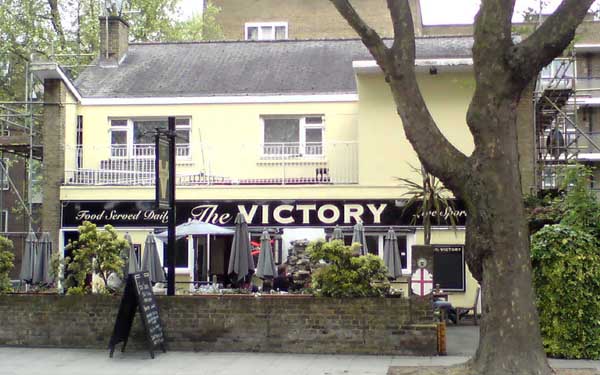 The Victory used to have a large nice concrete-relief likeness of HMS Victory on the exterior wall - the flat area slightly obscured by the tree. But since the recent renovation, ie. lick of paint, it's gone. Shame - as a friend of mine put it "it was the only thing of architectural merit about it". In fact they've just painted over it, and you can still just make it out if you're stood under it but you'd think that a proud English boozer like this would want to make more its proud English maritime connections. 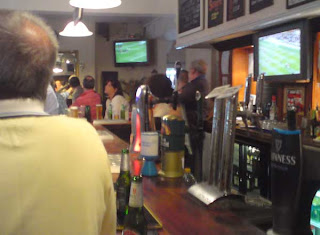 It's the last day of the season, and Spurs and Arsenal and battling it out for the last place in the European Champions league, so cue lots of excited locals. Especially excited when the Arse scored. Predictably no ale, but the very nice barmaid did me a Guinness instead. 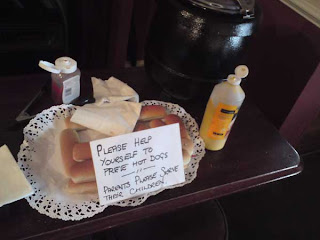 I was tempted to help myself to the free fare, but given that no-one else was and I was the new boy in town I didn't dare. Perhaps I should've got my parents to serve me? 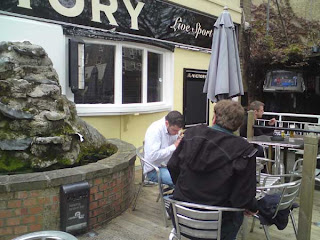 Too bad the the water feature is turned off, perhaps it was irritating the fine koi carp in the pond beneath. The beer-front-yard gave a fine view of the road, and was full of kids. At least it keeps them out of the pub. Also, I think this could be the only pub in Camden with an outside telly. Worth bearing in mind, if you want to watch the footie on a warm afternoon - tucking into a free hotdog.