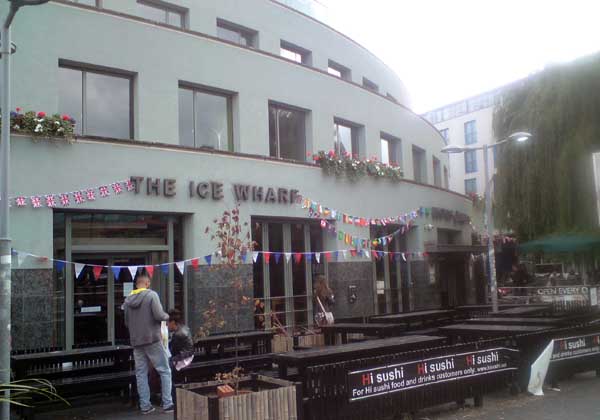 What are the best things about a cavernous barn-like Wetherspoons house? The range of ales, the peaceful air of no telly or jukebox, and no interminable flashing and flickering of fruit machines. But take these away and what are you left with? Answer - a Lloyds bar! 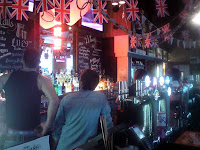 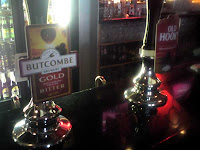 That's what the Ice Wharf is. Camden's newest-built pub, at least it's got a sensible name with a good hefty nod to the local history - which 'Spoons is of course good for. After a long walk to the bar - it's a big place - all the bar staff were much more interested in watching the Olympic gymnastics on the telly, and trying to mimic the moves to much evident amusement among themselves. Eventually I caught an eye, and opted for the Butcombe Gold instead of Old Hooky. There would have been Abbot Ale too but it had just gone off. As this was a rare occasion that I could use my Camra 50p-off-in-Wetherspoons vouchers, it came to £1.95 for a pint. Not bad at all, even if it was served up in a plastic glass. Any pub that gives me a plastic glass by default makes me think I'm definitely likely to get glassed and doesn't make me want to stay. 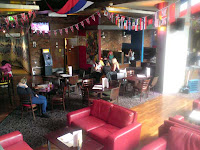 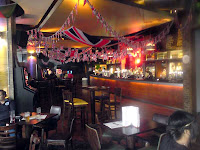 The bar staff were all very nice though from what I could see. But they did do that annoying thing - twice... "Hello... hello? Hello mate? Excuse me? Hello?" I heard as I was engrossed in typing a text. I looked round. "Being served?" - I had my glass of beer in front of me. And then again when I was watching the gymnastics myself. Touche! I know they're just being eager, but it does get on my thre'pennies.

The funny thing is that it's always busy. I went in on the weekday about 5pm and there were plenty in. Mainly tourists, a few old blokes and odd scary rough sort with whom eye contact looks inadvisable. On a weekend people are queuing up to get in, which involves running the gauntlet of some very moody looking bouncers.
There's a canal-side beer garden which just looks dirty. I guess it's all cheap and cheerful-ish, but it's not a Wetherspoons and yet it's not not a Wetherspoons. I don't get the attraction.