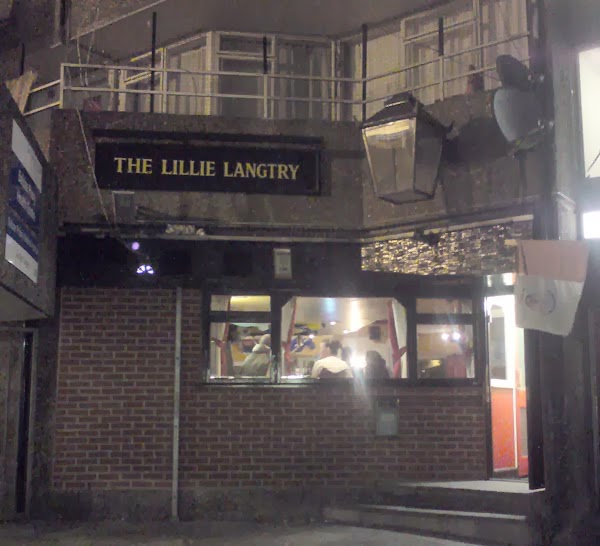 A pub with a flat-roof, even though the roof is perhaps 8 or 10 floors above the pub, but it's still a flat-roofed pub so we know what we're going to get. And we get just that, so like it or lump it. Loud music, plenty of sports, no ale and local locals all having a good time at just after 4pm.

The main problem with a pub like this is that you don't half feel conspicuous taking photos, and my bloody camera-phone reverted to it's often annoying habit of putting the flash on, and the problem with this is with the flash on my camera-phone produces photos that are almost totally black.
I'm sure I caught the eyes of the two chaps behind the bar, so I supped my lager and left. 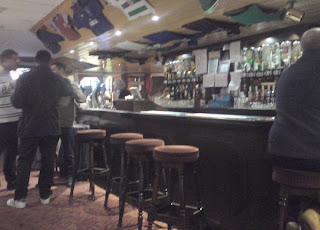 Some notes of possible interest from the internet:

"Kilburn’s residents will also be pleased to see that while the pub has undergone an amazing transformation, the old pub sign remains – a reminder of the origins of its controversial name.
Originally the Princess of Wales, the pub was renamed the Lillie Langtry in 1969 after the site was redeveloped. In Victorian times, Lillie Langtry was the mistress of the Prince of Wales and, as the NW6-blogger Ben Fordham puts it, it was a case of “down with the nation’s princess and up with the local mistress”.
In 2007, the pub changed its name back to the Cricketers, but the old Lillie Langtry pub sign stayed.
"


So there you go. Definitely called the Lillie Langtry now though.