Why has it taken me so long to go to this pub? I've walked past so many times, thinking to myself "I bet that's a charmless dump..." but as we've found time and time again judging books by the covers makes an ass out of u and me! 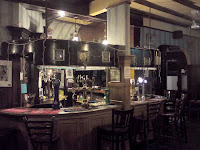 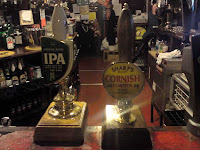 Ok, so this is based on one visit and therefore I accept accusations of hyperbole but I think this could be the best pub in Camden. Let me explain.
As I approached I peered in the window by the door and it looked pretty dead so I went round the corner to the other door and went in kind of expecting everything to stop and everyone to turn and stare at the stranger in town. Not a bit of it - well there were only two people in. And the door-choice was irrelevant anyways as the three original bars (a saloon bar, public bar and a private bar + a separate off-licence and what looked to me like a snug) had been knocked into one. But no matter as it doesn't feel like one huge empty room, and the bar is still kinda-partitioned. I'm not a fan of open plan. 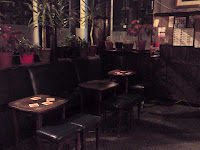 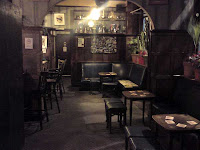 There's two ales, Greene King IPA and Sharp's Cornish Coaster. And as it happens I had several of both throughout the evening, and both were very pleasant. And both were £3.10, very reasonable indeed. I nipped to the loo through the old offy bit, which is now a hallway / art-gallery / cloak-room / charity book shop and within minutes of coming back was engaged in conversation with the other two chaps in there, mainly about Ikea and the Isle of Man and Jersey as holiday destinations, and then we drifted on to hockey. See - a stranger walks into a pub and with a quarter of a pint is chatting away with the other punters like nobody's business. After a while Dave from Yorkshire has to go and catch Merlin so I have one more. Or that was the plan... I get chatting to the landlady. A friendly Irish lady called Martha, who unbelievably has been running the place since 1972! She kept me entertained for hours with tales about barring Bill Nighy for being a dick and drinking with Peter o'Toole who was very nice. Karl Marx used to drink there too. She explained the history of the building, and pointed out the refrigerated shelves that I'd imagine are fairly unique - and run off the same pipes and chiller unit that was there when they moved in. Before here she used to the run the Bree Louise in the 60s, then known as the Jolly Gardners.  And despite not drinking herself and not really a frequenter of other pubs she was up all the Camden pub gossip and knew all the other publicans.
She modestly claimed that she thinks they're the long serving publicans in Camden. "In London!" I proffered - "In England maybe!?", "No no - there'll be those that were born in the pubs" she countered. Good point.
She also urged me to go to the "other" loos, which are interesting as you have to walk over a small bridge to get there. How many Camden pub toliets are accessible only via a bridge? Also, from the bridge you can see a door that opens up... well, into nowhere! She had no idea what that door was for. A mystery indeed!
It was first my visit and Martha treated me like an old friend - including all the trials and tribulations of her family. What a charming lady. 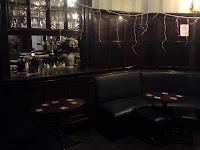 The decor is pure "1970s proper pub". Wood panels, carpet, foliage, pvc banquettes, trophies, photos of locals and a huge stuffed pike. Despite the telly being on, and fruit machine flashing (albeit quietly) and then the telly being replaced by behind-the-bar music that was a mix of easy listening and Rod Stewart's greatest post-Faces hits, it was a wonderful cosy comfy place to be. Some would describe it as "tatty" or "shabby" or "in need of improvement", but it really really doesn't. And what do those people know about anything anyways? They'd want everything redecorated every few years according to their fads and whims - a recipe for a pub and heritage disaster. It felt like being in a pub in some unspoilt sleepy Cotswold village, not in the middle of a north London housing estate. 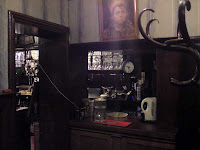 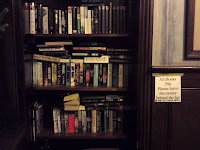 Understandably Martha wants to retire, so the remaining ten years of their lease is up for sale. I think she doesn't want to sell to just anyone, but whoever takes it on is bound to ruin it, ie. tart it up. Get in there while you can. I'm going back there this afternoon - and many afternoons to come! 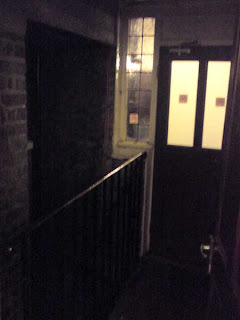 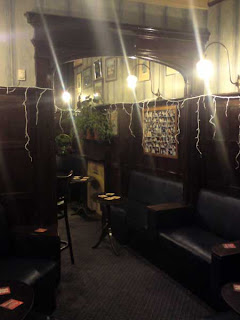 The Lord Southampton hasn't escaped the notice of Camra's list of historic pub interiors and rightly so! There's only about 15 or so in the Camden. I hope it helps protect it though, and not just record it. I doubt it though.
By Albert Trinker on 29.10.12