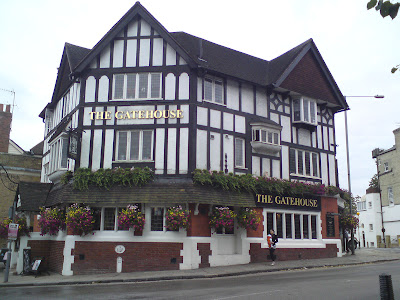 It's early September, only the autumn of the summer, if you get my drift, so you don't expect to see a roaring real (gas) fire in a pub. But then the Gatehouse in Highgate is no ordinary pub, it is a geographical record breaker - at 51.5degs N it is not only the northernmost pub in the borough, but also the highest. Towering a good 360feet or so above the mean sea level. There's probably nothing between here and the Urals and those arctic blasts must whistle straight through - hence the real (gas) fire. I'd hated to have been there without it.


I reckon the Gatehouse takes its name from a gateway into the Bishop of London's back garden from the old days, but I don't know. I could be completely wrong there. It is a Wetherspoons, but not a bad one at all. The main thing that gives it away is the JW trademark huge table full of sachets of sauces and condiments. But don't be put off, this is quite a pleasant pub - no doubt the trek north and ascent of Highgate Hill West put off the usual clientele. In fact it was very quiet, helped by that other muchly welcomed JW feature NO JUKEBOX! :-) There were a couple of Wetherspoonery old fellas minding their own business. And a table of middle aged Africans or West Indians (excuse my shocking memory but it was nearly a month ago.) whose brightly attired matriarch was loudly complaining about both her chicken and the English propensity to complain. 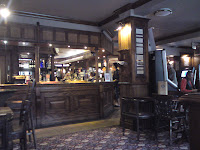 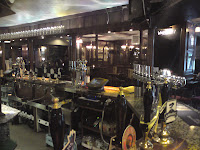 The time twixt visit and write up (a holiday dear reader!) also means I can't remember what I had - something nautical I think, some lighthouse thing or other? nor how much it was. Only that a half was half the price of a pint And that the barmaid seemed to take some persuading that I wasn't standing at the bar for the good of my health. "Young lady!" I called out mentally "no-one comes in a Wetherspoons for their health, so pray cease jawing on to you pal about X-Factor* and doth come and serve me." which she did with almost no fuss at all. One could get very comfy in here, with a choice window seats and cosy boothes. And the dining area looks like it might have from a gentleman's club. Even though I'm sure no gentleman would so blatantly ignore the "diners only" sign. And I've never been a gentleman's club anways - I guess this Wetherspoons is the closest I'll come. A worrying thought. But never-mind the future, there's lots of  history adorning these past. 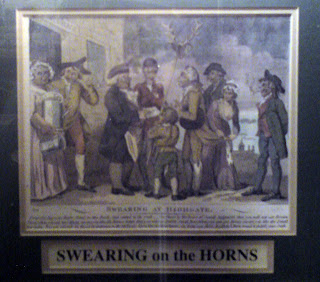 So who needs gentlemen's clubs when you've got horns to be sworn on and real (gas) fires in the autumnal summer?

* - probably. could have been boys. or look at that knob at the bar wanting to be served. let's make him wait.