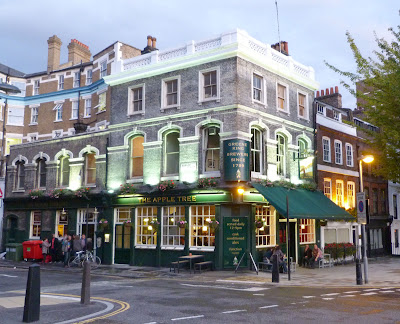 What nicer surprise to pop into a pub and to be unexpectedly and immediately greeted by a table of smiling pals. But then how annoying as to not be completely sure if the pub was in Camden or not. I said yes but only just, my friend said no but only just. The street signs on the pub side of the road said Camden, on they other side they said Islington - hence the confusion and brief debate before more important and interesting matters. But its presence here confirms that it is officially in Camden. But only just.

By the time we got here we were already quite in liquor so details are a little sketchy, and this is compounded by the distaction of chatting to said chums rather than noting down the shape of the barstools and percularities of the toilet signs. Etc. Sorry to disappoint dear reader, but it is so nice to catch up with the folks.
In fact the noisome atmosphere within was due to their regular Sunday afternoon music sessions Come Down and Meet the Folks formerly of a much missed boozer not of this parish. And a grand old afternoon it is too if you like the country thing. I really have no excuse for not going more often.

Initially my associate went to see to the business end of things while I settled down at the table with the others. He knows that  more often than not I have a bias towards the weakest beer on the menu so he came back with a Green King IPA for me. It sufficed. But next up I plumped for the St Edmunds - at 4.4% quite managable for a bank holiday Sunday!

We caught the end of the last act, who was very good. And quite the up & coming young thing by all accounts. Then followed the DJ, whose DJing technique was to simple leave his pre-prepared (is that a tautology? I'm never sure... simply saying 'prepared' doesn't quite sound right) mix-CD on. Very loud. But the contents were good, and his self-penned artwork was delightful. I just wish I could hear what he was saying to me. Loud, dark pubs I find a bit disorientating, maybe I am very photo-aurally-sensitive as no-one else seems to mind. I much prefer a wall-to-wall carpeted pub with nice wallpaper than one full of bare wood and painted plaster, but again I seem to be in a minority here.


I like this pub, good beer and good music and good people. Just a tad too loud. I don't really have more to write, but the people I was chatting to are the definitely the kind I'd like to sit under The Apple Tree with.