Hampstead is a lovely area, and if I was really really rich I'd live round here somewhere. But there's a problem with Hampstead, and that's that there's not many pubs, and it's especially noticable since a couple have closed in the past few years and a couple more have been gastro-fied. So I reckon there's only three pubs worth going in, and to the staff in one of them I had to explain what Morris Dancing was. Where do they get these people??

Today was the day of the big game. Previously in the Duke I'd seen much sports on the telly, and there's sporting memorbilia all over and the manager once proudly showed me his downstairs sports bar - ie. the cellar, where he'd be showing this competition and that world cup and then proceeded to try to get me to guess what was in his special cocktail - poured from a 2litre plastic coke bottle and looking like off-white emulsion. After three tasty shots the only ingredient I managed to guess was 'cream'. Imagine my disappointment then when after walking miles and miles and miles (Hampstead is miles and miles and miles away) and being greeted with an off telly, and live Irish music instead. Normally this would be the way I'd prefer things in pubs but not this day. Bah! Oh well. Might as well have drink.

The Duke has a decent range of 4 or 5 ales on, and I opted for the very sessionable 3.4% Adamn's Lighthouse (£3.20 / £1.60) and being a bit peckish after my long walk the cabinet of warm savouries caught my eye. Plumping for a £2.50 sausage roll the salivation began.

Seeing the £2.50 sausage land in front of the salivation ceased and the disappointment set in. I'd never see such a small sausage roll in my life! It was wider than it was long. Mr Gregg would be spinning in his grave - if he's dead, and indeed ever existed. It was nice though, but at 83.3p a mouthful I really would have wanted a big more sausage and a lot more roll. Then the barmaid asked me if it was alright when she took the plate away, "Small, but perfectly formed" I told her honestly, and she gave me a right look (I couldn't quite decide what kind of look, but it was a look - a look of "I don't believe he's not completely satisfied with this little sausage roll I lovingly prepared for him, and even pointed him to the selection of one type of sauce and no mustard!") but I made it all better by quickly adding "like the best things in life!" she laughed politely and toddled off. But the barstaff were very nice I must say. And a barman - perhaps the manager - seemed to enjoying the company of the regulars, and even though every other word was 'fuck' he still rewarded with them a dish of roasties. Alright for some!

Nicely busy but not too loud I perched myself at the end of the bar, next to a no-doubt rarely used game of Risk! and directly opposite the boisterous regulars. I was able to over-hear the conversation between and chap who looked like a Bavarian hiker and very neatly-turned out fellow drink white wine. They were discussing why Inspector Dunstable had (or had not) been promoted and was it because of his name, much like why Private Pike had never been made a Lance Corporal in Dad's Army. Something to do with Constable Dunstable? No idea. The last I heard of their chat was the following: "I'm going over the hill in the usual manner." "You're going over the hill in the usual manner?" I do like pub banter like that. But I moved down the other end of the bar to hear the live Irish music better, and not so much the lively Irish man who thought he was the live music. The music was very nice, if you like a bit of folk. As I do and as did a very drunk and very old and slightly glamerous woman at the bar. They do do some good music in here - I went in once to be entertained by a young lady and called herself The Singing Harpist. She did what it said on the tin, and very charming it was too. More pubs should singing harpists in. 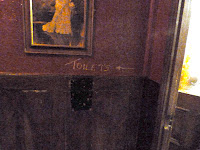 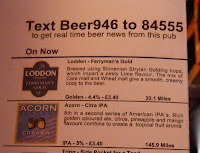 Also more pubs should have signs to the loos, or at least the last one I went into should. Note to the York and Albany : there's nothing wrong with a chalked toilet direction. I'm not sure how many pubs need real time beer news though, with a mysterious distance, presumably from brewery to pub, given to tenths of a mile. But still a nice touch though... I suppose. I do like this boozer - it has carpet and no jukebox and even though the lovely little barmaid I used to look forward to seeing every time seems to have now left, I shall continue to pop in, and if nothing else drink a toast to the tree out the back to which the pub owes its continuing existance, if Camden planning lore is to be believed. Even though getting there isn't at all handy. 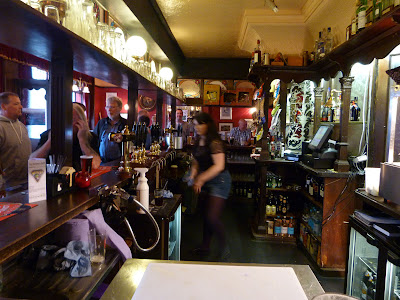