The grand old of Duke of York

How better to start this survey than to visit not only a pub I'd never been to before and, through no fault of its own one I'm unlikely to visit again. In fact, is the York and Albany even a pub? The lines between pubs and bars and even clubs are blurred enough a long while ago, but now with gastro-schmastro-pubs popping up all over the licensed victuallers' Venn diagram gets very complicated indeed. But also not very interesting. I think it's safe to say that the York and Albany would not even consider itself as lowly as a mere gastro-pub, but more a casual-but-fancy restaurant which tolerates drinkers - happily tolerates mind you.

Like much of Camden due south of the Zoo, it was built by that grandee of Portland stone and stucco John Nash and named after a pal of his - Prince Frederick, the then Duke of York and Albany. And a man so important as to have no inclination to get out of bed for a boring solo-dukedom. Possibly the same chap immortalised for indecisive hill-climbing in the jolly old nursery rhyme, but not the same chap as the grand cities of New York and Albany are named after (that Duke of Y 'n' A was of course James II / VII), but possibly the same chap responsible for the nomenclature of a much more boozy pub just down the road - but alas just over the border, so of no interest to us.
For as long as I've lived in the borough the York and Albany was abandoned, derelict and unloved - expect by the many pigeons who ate, shat and died within its once proud Georgian walls. About four or so years ago hard-hats and scaffolding arrived, and to the great pleasure by amateur and unlearned local history buffs like myself it was saved to the world. I forget by whom though - some 80s pop star or something like that I think, and was to be some sort of music venue. It was called the Blueberry or Mayflower or something similarly pretty and flowery. And meangingless. When the hoardings came down and I peered through the gleaming windows I saw the stupidest bar I'd ever seen. So huge and fat and round-edged it would've been impossible to lean against - as we all know, lean-against-ability is a very important property of a bar, and bars are always in need of propping. But to my knowledge it never opened, Gordon Ramsey - the well known gin salesman - stepped in, and hey-presto here we are now. Thankfully they left the lovely and presumably original exterior tiles alone, (the wooden flooring inside is very nice too), so if nothing else what must be one of the oldest pubs in north Camden is very easy on the heritage-eager eye. And huzzah to that!

For a drinker in perhaps the poshest pub (pub-type establishment) in Camden it might not be very comfortable, but it wasn't so bad. The only draught beer I could see was was Camden Town's keg Pale Ale (4.5%) at £4.50 a pint, or £2.25 for a half. No handpumps. I'm sure they have plenty of fancy bottles tucked away chilling, or perhaps beer drinkers are not their intended clientelle. I've only paid more than that once before, but at least they have the decency to charge half for a half. The glass came served on a serviette - like cool American bars do, and the change came on a silver platter with a cheery "Your change please." it went straight in to my pocket. As I relaxed into a large and comfy black leather sofa (all the 'lounge' furniture is exactly that, lovely in a lounge but useless for discussing important matters of the day with a drinking partner, a game of crib or pouring over today's cryptic) I overheard the barman asking a woman paying for her meal how it was, "Not to your usual standard I'm afraid" came the reply in a tone that was trying not to sound too cross or disappointed but also trying to let you know that she was actually quite cross and disappointed. I bet the shoddy whatever it was ruined the rest of her day, and therefore her husbands too. Her husband seemed like a nice fellow though - he showed me how to use the taps in the loo. Now, I'm no Stephen Hawking by any means but any tap that needs explaining to an experienced user of ablutionary facilities all over the world is a stupid tap.

The interior is generally dull or rather low-key but comfortable, the very considerate music system providing barely-audible nu-lounge-chill-out-jazz-elevator muzak. The bar was clean and efficient and business-like. On the wall there was mirror which reminded me of one my Nan used to have her parlour wall, and no-doubt for reasons of childhood familiarity and nostalgia it looked better at my Nan's. The odd looking black plastic thing to the left is actually a spotlight pointing upwards at the door and seeming to illuminate nothing at all, but I'm sure the effect is more striking at night. Talking of striking, just as I sat down there boomed a large clap of thunder. Had I seen the lightning I could've of course calculated its proximity extremely accurately but alas I missed the flash. But I would estimate it was quite close. The last time I heard a-thunder this loud was just I'd struck X in Boris's box in the Mayoral elections - surely a portent of good!
A couple came in, and their age-gap was indinstinct. An old boyfriend or a young father? Or something completely different? None of my business of course, but their enquiries as to how to order food at what time and where they could sit got my intrigued as to the fare here - even though I had pie & baked tater waiting for me at home. I looked around and thought I saw a pile of menus on the bar, but they turned out to perfectly crisp untouched newspapers - perhaps they iron them. A NY Times, Irish something-or-other and a Grauniad of course. Not a Racing Post in sight! Yes it's that type of place, I don't know why they even waste the money on newspapers. So although I don't know what the food is like, I'm sure it's not cheap although I've heard it's good. Using a Sunday roast as a sort of Big Mac index, make what you will of that it's £17 a head here. One assumes with all the trimmings. 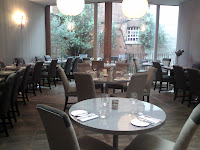 I went for a little stroll (to the loo as already mentioned). Past the dining area with a nice view of a brick wall - and I mean that. I like a nice old wall. Here there was another spotlight lighting nor spotting nothing. But I'm sure when it's turned on the effect is ummm atmospheric. 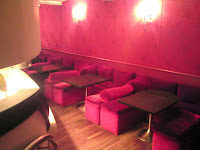 Downstairs was very nice, all plush red and boudoiry. This must be where the drinkers come in the evening. On dates and all inclandestine and the like. Drinking - nay, sipping - the fanciest of cocktails thus making them fancy too. I do like though the way that the seating down here does not encouarge any leaning back or lounging, thus making for good conversation. As important to a pub as the afore mentioned propping requirements of the bar. Just round the corner from here sat an army of staff having their pre-food food. All resplendent in their white pinnies they looked like a group of dental hygienists on a Chrimbo outing.

Although nearly at the toilet now I had no idea as I'd not seen a single gents pointer along the way, oh no - that would be far too cluttering. I found them though, fear not dear reader! Back upstairs to my comfy sofa and gassy pale ale. There's not a lot to look at inside here, but the lovely huge windows provide ample oppurtunity to look at the things outside. Be it a handsome Nash house across the road, or just the comings and goings of the traffic-lighted traffic on the busy junction at the which the pub sits. 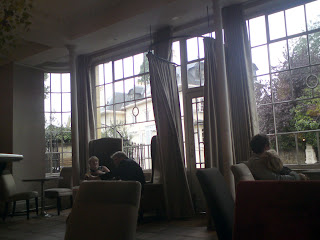 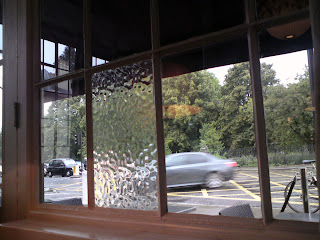 All very relaxing, until a sugar-fueled child started to run about. I can just about tolerate kids in pubs, but like dogs only as long they are quiet and well-behaved. And not running about. At least you can stroke a dog and treat it to pork scratchings, try that with a floppy-haired child and stern looks from mother will be sure to follow. But one of the unforeseen downsides of the smoking ban, is that in some pubs in the borough there's a certain type of young couple who deem that particular pub fit to also act as a creche. Cue tables clogged up with toys, games, crayons, wiping things and feeding bottles while the yummy mummies in attendance not only nurse their precious ones but also a half of sweet cider. Anyways, says the mother of child to father diligently chasing his boy round the place "we're not going outside in this [dashed awful rain]", "that's ok" says dad without a hint of irony "he's getting his exercise in the restaurant." !!! He's letting his child run about in a restaurant! No wonder the kids are rioting. Time to go. "Get the coffees Michael" says mother instructingly as she goes to the toilet. But not to be completely controlled Michael asks for teas. Ha! Get that women's lib. But then he let's us all down by ordering Earl Grey and mint - make that fresh mint. Got to be fresh. Although i have no idea if fresh mint tea is tea made from actual mint only to be pestled and infused on Michael's instruction, or just a different type of mint tea, this is not the tea of a builder. Michael and his wife and two lads did all seem very nice though - only too nice, y'know?


Also by now the masses of workers had emerged from their foddering downstairs and were now dashing around with the industriousness of good ants, and the calmness had been shattered. With five punters in there we were outnumbered by staff at 3:1, which would account by me being attended to the second my empty glass touched the table. The smiling waiter seemed surprised I wasn't staying for another, thanks but no - I have nice pubs to go to, not nice restaurants.
By Albert Trinker on 27.8.11