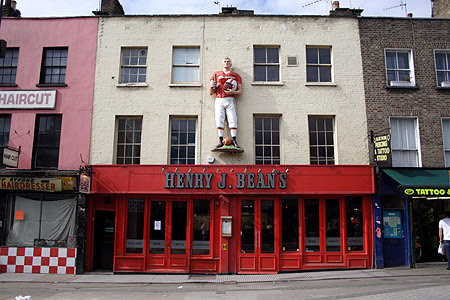 Now it's a touristy highly-stylised themed restaurant, it's easy to remember that there was once a touristy highly-stylised themed pub here. Henry J. Bean's was an supposedly American style pub, but as I recall once inside it was about American as an All-Bar-One. In fact, as I recall, it was just like an All-Bar-One. All blond wood and blond lager.

We used to go there after work when I worked nearby, and would either look out for or be accompanied by minor celebs from MTV. I can't really remember - such celebs are wasted on me, as are pubs like this.