"What a stupid flipping pub name!" a mate of mine commented a while back. And he's sort of right, but rest assured it's not a new fangled silly made up name, much as it might sound like it. Apparently it's as old as the pub - which I assume is of Nash era. And I think it refers to some Queen's penchant to the titular vegetable and her cook having a say in the pub or something. I can't really be bothered to Google it right now - although I'm surprised they haven't taken the trouble to explain in a golden script on a wooden board as many pubs do now when they want to generate some instant heritage. The little reserved sign on the table I say at carried a hearty-stomachy quote suggesting the Queen in question was the first Queen Bess. But I doubt it. And I digress! 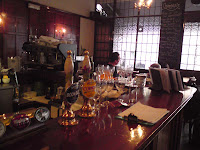 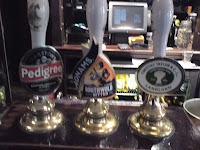 The last time I came in here the little foreign chap behind the bar attempted some feeble light-hearted matey belittlement with me for ordering a half. He obviously had no knowledge of Terry McCann's drinking habits. If the hardest man in London drinks halves, then so will I - I being one of the weakest. All barstaff in the capital should have at least a basic knowledge of Minder. So I got myself a half of Sharp's Cornish Coaster at £1.65 and thankfully got no wisecracks from the barman. Although he did proceed to tell some people that they couldn't move the tables, and his heavy French accent made to hard it to figure out if he was joking or not, so they carried on. Perhaps he was suggesting they should hurry up and buy some drinks before moving the furniture around. It did take them a while. That is a minor irritant to me - buy your drinks and then go and sit down. Bloody tourists! Tch. 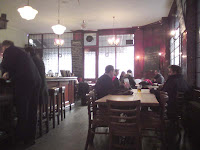 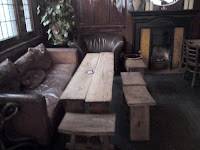 On a chilly afternoon like this what nicer welcome can a pub offer than a roaring real fire. But not here. Brr. Of the dozen or so people in I don't think any had taken their over-coats off, and sad forsaken fireplace looked just that. There's not much to say about the pub itself, it's very nice. Lots of wood. One end is loungey, one end is diningy. A pleasant place. The only annoying thing was the piped music. Bland modern light smooth pop FM or some such. Why? It always makes me wonder why they bother. Not one person has come for it, and not one person wouldn't come in if they didn't have it. It generates no income and no atmosphere. Everyone in there was chatting away merrily amongst themselves, and they wouldn't even notice if it was gone. The only thing achieved by its presence was the minor annoyance of me. Surely a real-fire would be more of a draw (no pun intended - if anyone gets it...) than a feeble music machine. 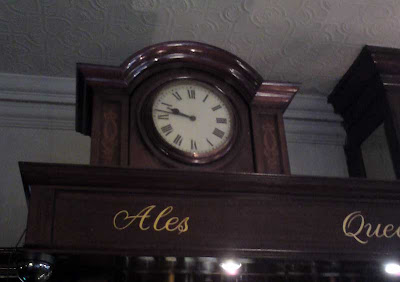 As I went in - at about 4.30pm ish - I noticed the clock was on 10.05 (am or pm I couldn't work out). Nothing unusual there, many pubs have broken clocks. But after a few sips, 3across and 1 & 9 down, I noticed that it now said 9.55 a/pm. Hey? Had the 1/2 gill of session ale already got me in a tizz. Nope.. it was definitely running  backwards. Ahh one of those joke clocks with the backwards numbers so beloved of pubs that also house a Big Mouth Billy Bass. But no... the numerals were clockwise. How peculiar. As I returned my drained glass to the bar I asked the barman about it. The only words I could draw out from l'accent were that "it was the system when the clock was made, they were all like that." Oh? says I. When was the clock made? I enquired. "1920s or 30s? I dunno." Right... so it's a joke clock! "Nooo it's just the system." So now you know.

Perfectly nice pub with a nice range of familiar beers, although the only point of real interest is a joke clock. Sorry - system clock.
By Albert Trinker on 10.2.12